Festival d’Arte and much more, july 2018

At the beginning of June, we left this time with no less than 4 suitcases and 3 carry-ons to Lumbo. A small explanation was needed at the immigration service but fortunately the stuff for the festival, the hospital and the escolinha were all allowed to enter the country! The library has been supplemented with Portuguese books and the games are already being played. Of course with many thanks to our Brazilian and Dutch friends. The musical instruments that we brought with us, we’ll keep until August. 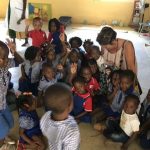 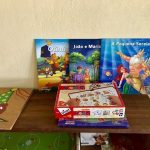 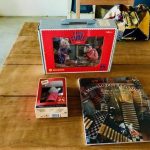 The terrain of the school looks neat and is as good as finished with two extra swings, a seesaw and the last lick of paint. A lamp post with a sensor that automatically switches on and off is also installed for safety and visibility. In view of the fact that the bamboo fence of the school has unfortunately not been very strong, we have chosen to put up a solid wall. The construction is in full progress. 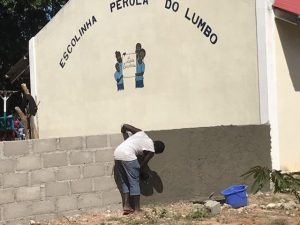 The plan: Until now the school is full of children until 12 o’clock and there is even a waiting list! Until 3pm there are 36 children, including lunch. Our aim is to let all children go to school until 3 pm, knowing that all children get a nutritious meal.

The ATL (actividades tempo livre) for the 6-year-olds of primary school still has our attention. We hope for the start of the new school year, February 2019, to come up with a concrete plan together with the Cooperação Portuguesa. 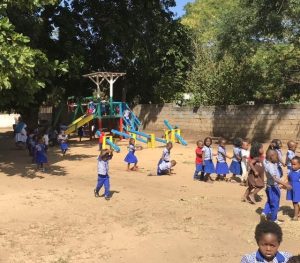 In the first week of June we spoke again with the midwife of the materinade in Lumbo, Lucinia. She was overjoyed with the medicines, glucose meter, 2 blood pressure monitors and the doptone given to us by: Josje, Leo, Anja, Joanne and Mr. Vroegop and made possible by the donation of the Rotary Amersfoort.

There was even more joy with the news that we have found a new candidate for the training of the ultrasound equipment: Adrienne Blankhart. She will give the training in August 2018 in the now vacant pediatrics. There will be 4 candidates (and an interpreter) present, including Lucinia (midwife of Lumbo), a nurse from Lumbo and the doctor and 1st nurse of the hospital on Ilha de Mozambique. The material for the training, given by Adriana, is in any case eagerly reviewed! 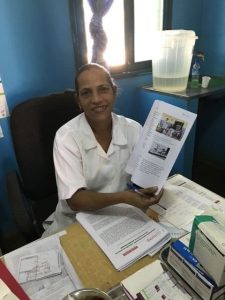 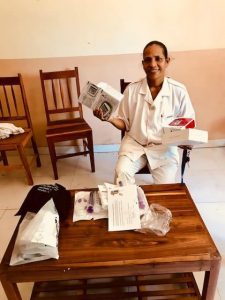 ADRIENNE BLANKHART
Meet our new volunteer Adrienne Blankhart. She was born in Utrecht and has also completed her studies as a gynecologist. After having worked in Dutch hospitals for many years, she retired in 2012. She then worked on various projects in Nepal, Ethiopia and Ghana and gave ultrasound courses in Armenia. Now it’s Mozambique’s turn! 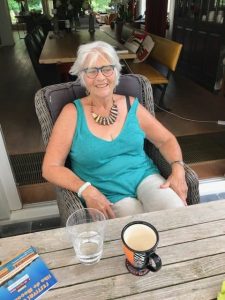 COME TO THE MARKET IN CHAAM ON 11 AUGUST

This year, again, we are at the ‘Jaarmarkt’ in Chaam (NL) with the POM. Curious about our work? Always wanted to have such a handmade bag of capulanas? Or would you like to talk to one of our volunteers? Visit us in Chaam between 11:00 and 17:00h.

The festival is already starting to take shape! Flyers and banners are distributed in Nampula and Lumbo and at the beginning of July the island will be covered with flags! The museum is working hard at the coffee corner and an art / coffee room is also made available by one of our neighbors, where we will also create a shop with POM products.

The artists and participants of the festival are also busy. For example, a photo book of the residents of Ilha is being worked on, clay is being sought by local potters for various workshops and stones are being collected for sculpting the artists (Shoonah group) from Zimbabwe. Irene Berger is also busy with the choreography for the opening of the exhibition, performed by the dance groups, musicians and local people. We were also approached by Jiel Chilaule, professor at Unilario University. The tourism students are happy to take care of local dances in Macuti town (the old city). In addition to performances by singer Anna Fabrello, Guy Felix and musicians from Beira and Ilha, it promises not only to become an arts festival, but also to become a musical festival.

Given the amount of sun hours, sustainable energy is the ideal solution in Mozambique. Herre Hoekstra from Rotary Amersfoort has presented us with a solar solution for the Maternidade, Poste de Saude and Escolinha. We are now looking locally for a technical, English speaking person who is allowed to follow a course in the company ORB in India, focused on solar panels. To be continued!